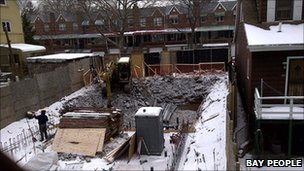 Inside a Brooklyn courtroom on Tuesday, the latest confrontation between Muslim Americans wanting to build a mosque and protesters wishing to stop construction unfolded.

“Equal and exact justice to all men,” read the words of US President Thomas Jefferson, inscribed on the court’s wall.

Assembled in the packed courtroom were different residents from Sheepshead Bay – some Muslim Americans, others from a group called Bay People who were applying for an injunction to halt the construction of a mosque in their neighbourhood.

The nation founded on the principle of freedom of religious worship is seeing disputes from Tennessee to New York’s Staten Island, as Muslims wishing to build places of worship run into opposition – almost 10 years after the 9/11 attacks.

The most high profile case was the Islamic centre to be built close to Ground Zero in Manhattan – now it was the turn of what critics call the Brooklyn “mega-mosque”.

If the mosque in Sheepshead Bay were built, traffic, parking difficulties and the noise of the call to prayer would be disruptive, Bay People has claimed.

“The neighbourhood residents are mostly of Italian/Russian/Jewish/Irish descent and will not benefit from having a mosque and a Muslim community centre,” the group’s website states.

But others accuse the organisation of a thinly-veiled anti-Muslim agenda.

Albert Butzel, the lawyer representing Bay People, told the Judge Mark Partnow: “Despite the defendant’s claim that the basis for our opposition is racism, that is simply not the case. ”

Mr Butzel said the opposition to the mosque arose from its location in the middle of a residential, low-rise area.

The same arguments would apply to a church or synagogue, he said.

The “invasive facility”, three stories high, would create traffic problems, as it would not have off-street parking.

“We believe zoning regulations have been violated but the department of buildings does not,” said Mr Butzel.

For the defence, lawyer Lamis Deek said a “terrorising environment” had been created for the Muslim community in Sheepshead Bay. 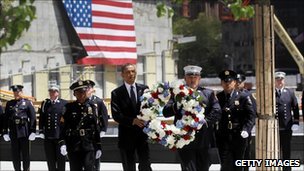 The case was motivated by “racism and hatred”, Ms Deek said.

In the same neighbourhood, a third of a mile (0.5km) away, was a much larger church, without off-street parking, and a synagogue that’s under construction.

“Why not have rallies and protests against the church and the synagogue that’s nearly built?” asked Ms Deek, who pointed out that there were two six-storey buildings directly behind the site of the mosque.

After both sides had made their case, Judge Mark Partnow announced that based on the evidence, the application to halt construction of the mosque had been denied – to loud applause from the mosque’s supporters.

“My daughter saw that graffiti after Osama Bin Laden’s death, and I had to explain it all to her. It’s so sad that you have to do that,” Diana Mohamed said.

She added: “I’m happy with the result. Living with the protesters and hearing what they say, seeing those signs, the hateful looks, it’s really bad, we just want to live peacefully.”

Lenny Nor was disappointed by the judge’s ruling.

“My window is across from the construction. We are worried about where they will all park,” Mr Nor said.

“There’s no racism. The problem is they’re playing the anti-Muslim card,” said another man from Sheepshead Bay, who didn’t want to give his name.

This is an issue which goes far beyond a Brooklyn courtroom.

Muslim Americans building places of worship are encountering fierce opposition across America, where freedom of religious expression is a constitutional right.

The Sheepshead Bay case has attracted prominent US critics of Islam, like the blogger Pamela Geller, who played a leading role in the protests against the proposed Ground Zero Islamic Center.

“It’s a proxy of the Muslim Brotherhood, an extremist organisation,” she says.

She adds: “They’re violating building codes, yet the city, and government officials are in the tank on these issues, it’s political correctness.”

“They’re trying to establish a rabat, a beachhead, in a small residential neighbourhood.”

Ms Deek told the BBC that the idea that Muslims were foreigners no matter how long they had lived in a neighbourhood was racism, intensified by the political environment.

But she sensed a change, as Muslims assert their constitutional right to freedom of worship.

“The Muslim community is tired of being victimised,” Ms Deek said.

While local opponents of the Sheepshead Bay mosque state their opposition in terms of noise concerns, national critics of Islam see its construction as yet another encroachment by what they believe is a repressive ideology.

Muslim Americans are determined to stand up for their rights. Bin Laden’s death has done nothing to lessen the mutual suspicion between the different sides.

Debbie Almontaser, of the Muslim Consultative Network, a group advising Sheepshead Bay Muslims, says Muslim Americans will stand up for those rights against what she calls a national epidemic stemming from Islamophobia.