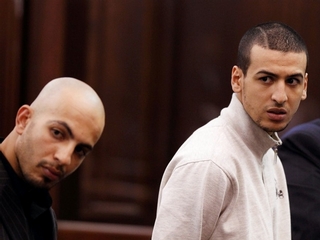 Suspects in the Manhattan synagogue plot, Ahmed Ferhani (l) and Mohamed Mamdouh, at their arraignment May 12. (Pool photo by Lucas Jackson)

Ahmed Ferhani and Mohamed Mamdouh pleaded not guilty to weapons possession and hate crime and terrorism conspiracy charges at their arraignment in Manhattan Supreme Court on Wednesday.

Ferhani, 26, and Mamdouh, 20, were originally charged with more serious conspiracy offenses but still face up to 25 years in prison if convicted of the top count, the felony weapons charge.

District Attorney Cyrus Vance said the defendants “plotted to bomb synagogues in Manhattan in an effort to contribute to what they referred to as ‘the cause.'”

“Their desire to commit violent jihad against Jewish Americans is not only an act of terrorism, but also a hate crime,” the DA said in a statement.

But lawyers for the defendants claim they were set up by a politically driven mayor, district attorney and police commissioner seeking to further their own “financial personal and political ambitions.”

Lawyer Elizabeth Fink, who represents Ahmed Ferhani, cited the fact that the city went ahead with the case despite the fact that federal agencies opted not to pursue it.

Fink admitted Ferhani purchased semi-automatic pistols, a revolver and a grenade as alleged but insisted he had no plans to blow up a synagogue.

But she said her client is mentally ill and was ensnared by authorities.

Lawyer Lamis Deek, who also reps Ferhani, said he has been involuntarily committed for psychiatric issues by the city “20 to 30 times.”

Mamdouh’s lawyer Aaron Mysliwiec noted that the “charges have dropped a significant level” between the time of the defendants’ arrest and the indictment by the grand jury.